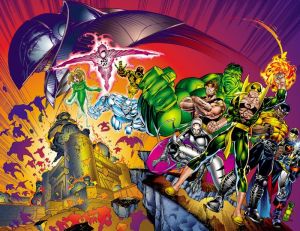 Share:
Luke Cage and Danny Rand reunite in team-ups with Spider-Man and ... Sabretooth?! And they're just in time to relaunch the expanded Heroes For Hire! A super-villain prison break inspires Iron Fist to fill the void left by the Avengers and Fantastic Four -- but his ex-partner Luke will take some convincing. Hercules and White Tiger are eager recruits, but is the Hulk a joiner? Maybe She-Hulk would be a better fit. A transformed Black Knight rides in, and Luke has his arm twisted by the Master of the World. But will he stay after Power Man battles Iron Fist? The team will face Deviants, Punisher and the Thunderbolts -- there must be a little room left for Ant-Man to help out.