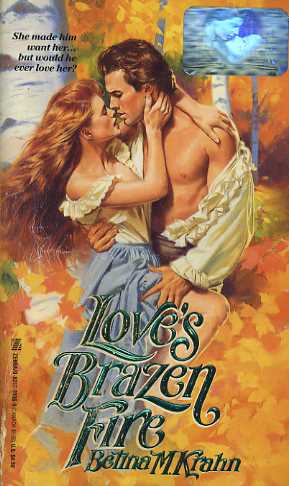 Share:
She made him want her... but would he ever love her?
SHE HAD TO PERSUADE HIM

Barter was a way of life in Rapture, Pennsylvania and Whitney (Whiskey) Daniels learned long ago that everything has its price. So when an officer of the new federal government threatened to arrest everyone in sight for violating the unfair tax on spirits and distillers, Whitney was sure she could talk him out of it. But the innocent beauty soon realized that handsome, stubborn Major Garner Townsend was a formidable opponent. The only thing she might be able to entice him with was herself! And as she looked into his piercing blue eyes and felt the heat of his lean, muscular body luring her nearer, she realized that there would be no losers in this tempting bargain... only tender lovers!

HE HAD TO POSSESS HER

Garner was determined to do his duty, even if it meant breaking the heart of the lovely, infuriating Whitney Daniels. But the green-eyed spitfire managed to cloud his judgment and melt his icy composure. Before long he was dreaming not of upholding the law, but of holding her close! He might have to silence her arguments with kisses, but that would be no hardship. Her lips were rosy and inviting, her skin creamy and soft, her eyes aglow with sweet anticipation. And somehow he knew that together they would set the night ablaze with the wondrous heat of LOVE's BRAZEN FIRE.