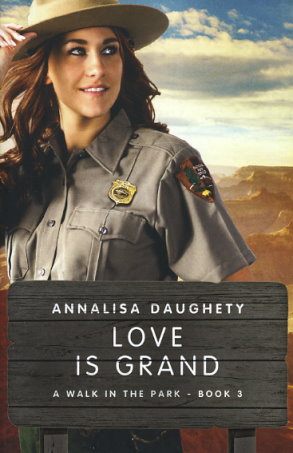 But after her husband's unexpected death, she left her job and retreated to the safety of her parents' home. Two years later, Ainsley is still there, raising the baby alone and envisioning danger around every corner. When her position as a park ranger at the Grand Canyon reopens, she realizes God may be trying to tell her to return -- if she can face the fears that hold her captive.

Fellow ranger Dustin Cooper is thrilled to have his old friend back. But Ainsley isn't the fearless girl he remembers. Even so, Dustin pushes her to put her trust in God and jump back into her life.

Policeman Jake McGuire fled to the Grand Canyon after an on-the-job mistake. He's determined to live a stress-free, anonymous life. Until he meets Ainsley. Suddenly he realizes he'd like to be a hero again -- if only in her eyes.

Can Ainsley regain her zest for life -- despite the risks -- and find the right man to walk alongside her? If so, she may be surprised to find that even the second time around, Love Is Grand.