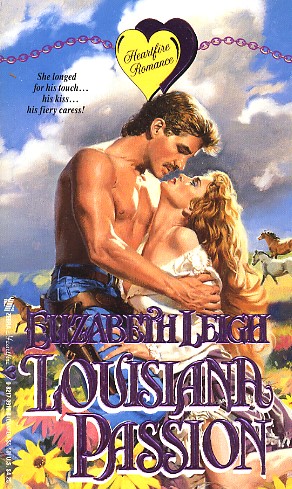 Share:
SHE COULDN'T DENY HIM
Proud of her brand-new medical diploma, Illinois beauty Wynn Spencer was ready for a frontier adventure, but when she arrived in Jennings, Louisiana, she got a rude shock: the homesteaders didn't trust lady doctors, and the whole town was run by scowling, devilishly handsome Michael Donovan -- who took an instant dislike to her. Vowing to win him over, Wynn mounted a campaign first for peace -- then for passion. She'd tease the somber Michael with a gentle smile, entice him with seductive glances, and finally surrender to endless rapture in his arms...before the summer was over!

HE COULDN'T RESIST HER
For most of his life, Michael Donovan had harbored a bitter hatred against all doctors, beginning with the Illinois sawbones who'd been responsible for his mother's death. Now, owner of the first homestead grant in Jennings, the ex-riverboat gambler was finally at peace with himself... until an uppity woman doctor stepped off the train and brought back a flood of bitter memories. He'd make life miserable for her, Michael decided, then send her packing. But once he heard Wynn's soft voice and saw the sensuous fire in her blue eyes, he decided to change his strategy. He'd taste deep kisses from her rosy lips, span her tiny waist with his hands, then caress every inch of her seductive body in a wild and passionate storm of prairie ecstasy.