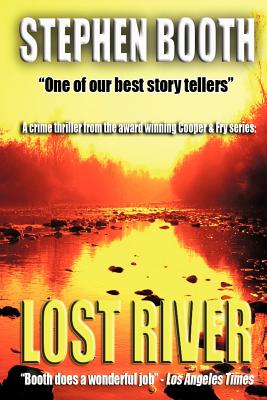 A 'Sunday Times' bestseller in the UK, LOST RIVER is the 10th novel in the multiple award-winning Cooper & Fry series, set in England's beautiful and atmospheric Peak District.

A May Bank Holiday in the Peak District is ruined by the tragic drowning of an eight-year-old girl in picturesque Dovedale. For Detective Constable Ben Cooper, a helpless witness to the tragedy, the incident is not only traumatic, but leads him to become involved in the tangled lives of the Nields, the dead girl's family.

As he gets to know them, Cooper begins to suspect that one of them is harbouring a secret - a secret that the whole family might be willing to cover up.

Meanwhile, Detective Sergeant Diane Fry has a journey of her own to make - a journey back to her roots. As she finds herself drawn into an investigation of her own among the inner-city streets of Birmingham, Fry realises there is only one person she can rely on to provide the help she needs.

But that man is Ben Cooper, and he's back in Derbyshire, where his suspicions are leading him towards a shocking discovery on the banks of another Peak District river...

"Crime fiction for the thinking man or woman, and damnably hard to put down." - January Magazine

"Ben Cooper and Diane Fry are the most interesting team to arrive on the mystery scene in a long while." - Rocky Mountain News

"One of our best story tellers." - Sunday Telegraph

"There are few, if any, contemporary writers who do this as well as Stephen Booth." - Arena magazine

"Booth is a modern master of rural noir." - The Guardian

"Booth delivers some of the best crime fiction in the UK." - Manchester Evening News

"If you read only one new crime writer this year, he's your man." - Yorkshire Post