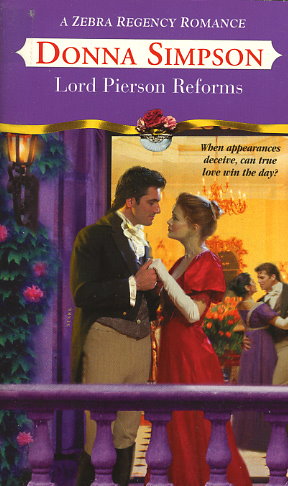 Share:
LOVE AT FIRST SIGHT...
An angel--that's what Dante Delacourt, Viscount Pierson, spies as he staggers home one foggy night. Admittedly, he is quite in his cups, but the blonde vision in the passing carriage is surely the archetype of goodness--a moral compass to guide him away from his scandalous past. Pierson can hardly believe his luck when he encounters this paragon the next day, in the company of her chaperone, Miss Amy Corbett. Yet for all her physical loveliness, Lady Rowena Revington seems a touch...temperamental, and Pierson turns more and more to wise, warmhearted Amy for courtship advice and companionship.

...COULD USE SOME SECOND THOUGHT
Amy has been charged with finding Rowena a husband by the end of the Season, and it is no easy task. In public, Rowena is the epitome of genteel maidenhood; in private, she's a spoiled harpy who despises men. While a marriage between Rowena and Lord Pierson might advance Amy's career, it could only end badly for the couple...and for Amy, too. For she has fallen head over heels in love with the dashing and witty lord--but will he ever be able to see the true and tender heart that is his for the asking?