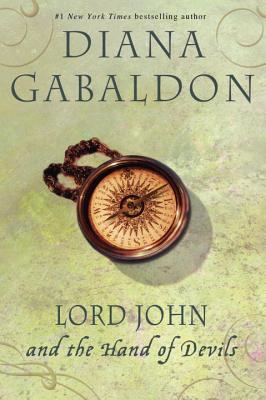 Share:
A keepsake collection of Lord John Grey's shorter adventures and a spectacular addition to any Gabaldon fan's library, Lord John and the Hand of Devils brings three unique novellas together for the first time.

"Lord John and the Hellfire Club" marks the first appearance of Lord John outside the Outlander novels. A young diplomat who had begged for Lord John's help is killed before he can explain his need. Witnessing the murder, Grey vows to avenge the young man, as the trail leads to the notorious Hellfire Club and the dark caves beneath Medmenham Abbey.

In "Lord John and the Succubus," Grey's assignment as liaison to a Hanoverian regiment in Germany finds him caught between two threats: the advancing French and Austrian army, and the menace of a mysterious "night-hag,"
who spreads fear and death among the troops.

Finally, in "Lord John and the Haunted Soldier," Lord John is called to the Arsenal at Woolwich to answer a Royal Commission of Enquiry's questions regarding a cannon that exploded during the battle of Krefeld. Accusations ensue, and Lord John finds himself knee-deep in a morass of gunpowder, treason, and plot -- haunted by a dead lieutenant, and followed by a man with no face.