Lord John and the Brotherhood of the Blade — Diana Gabaldon 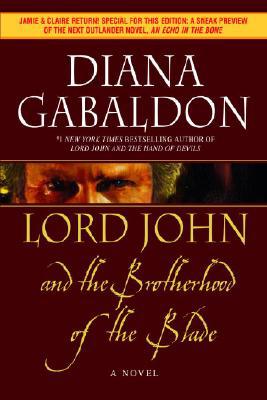 Share:
Diana Gabaldon, the New York Times bestselling author of Lord John and the Hand of Devils and the Outlander saga, brings back one of her most compelling characters: Lord John Grey. Here Gabaldon weaves together the strands of Lord John's secret and public lives -- a shattering family mystery, a love affair with potentially disastrous consequences, and a war that stretches from the Old World, to the New

It's been seventeen years since Lord John's late father, the Duke of Pardloe, was found dead, a pistol in his hand and accusations of his role as a Jacobite agent,. staining forever a family's honor. Now unlaid ghosts from the past are stirring. Lord John's brother has mysteriously received a page of their late father's missing diary -- and John is convinced that someone is taunting the Grey family with secrets from the grave. So he turns to the only man he can trust: the Scottish Jacobite James Fraser. But war, a forbidden affair, and Fraser's own secrets will complicate Lord John's quest. Until James Fraser yields the missing piece of an astounding puzzle -- and Lord John, caught between his courage and his conscience, must decide whether his family's honor is worth his life.