Living in a Postcard — Daisy Jordan 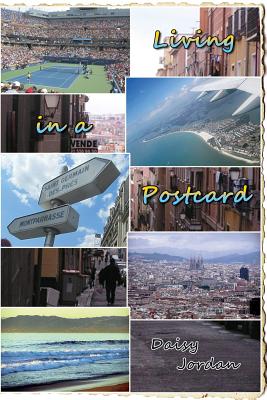 In May 2007, two photographs drastically changed the course of Hilton Joliet’s life. Now, twenty months later, the wild ride hasn’t stopped. It’s a new year of jetting off to a different location each week, hanging with the best tennis players in the world, taking the scandalous pictures of them her boss at Game Set Match magazine loves her for, and finally starting to work on her book, which will document one year in her life through pictures and places and be called Living in a Postcard, a term Hilton and her best friend Jill coined to represent living in the moments they would die for. For Hilton, that’s what 2009 is all about. After spending the off season adjusting to the end of her seven-year relationship with her boyfriend Luke, who is still her roommate, Hilton rejoins the tennis tour ready to have the time of her life with her two favorite players, bad-boy-turned-actually-kind-of-funny-hookup-buddy Haidin Bayliss and her best friend on tour Tanner Bruin, the guy who might be perfect for her if she were a little more over Luke and he were ready for something more serious than a six-month joyride. Sundance, Utah, the opening location for Hilton’s book, provides a week of hot tub parties and laughter-filled twists and tumbles down the slopes. But it’s not long before the twists and tumbles look dreadfully different. Hilton’s no-strings-attached fun with Haidin takes a confusing turn, Tanner drops a bomb about his girlfriend Austin, and Hilton withholds the biggest tennis story of the year from GSM in a failed attempt to protect a friend. In the midst of her boss’s fury, one player’s maddening slump, a season-halting injury, an encounter with a ghost from the past, and the disturbing moment of realizing the actual postcard that is her life no longer matches the image in her head, Hilton manages to find another explosive story that will save her job. But all along she’s been missing the most unexpected, and yet maybe the most obvious, story of all, one that will once again drastically change her life.
Reviews from Goodreads.com