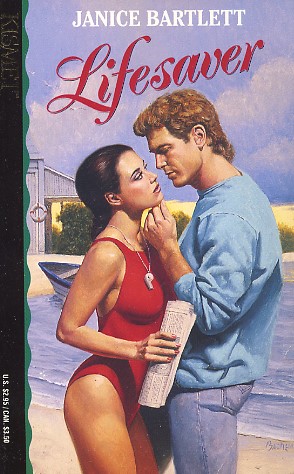 The sun was setting over Devil's Lake when Megan spotted a boat offshore. She couldn't make out the faces of the two men aboard, but she saw them toss something overboard and speed 'away. The object thrashing in the water was a per-son -- a drowning man! The water was ice-cold and the victim was far from shore. But with Megan's training as a lifeguard and an Olympic swimmer, she just might be able to save his life.

Mac was drowning, submerged in watery darkness, when she appeared. At first, he thought she was a mermaid, with her dark hair floating about her in the water, her unfathomable eyes, and arms that held him tightly. Before his mind cleared, he was crawling along the rocky shore, saved by a very real, very beautiful woman.

There was only one catch. The men who had tried to kill him would come back to finish the job. When they returned, they would also wipe out the woman who'd witnessed the first murder attempt. The next time, there would be no mistakes. The moment Megan dived into Devil's Lake, she had entered dangerous, deadly waters, and now there was no turning back.
Reviews from Goodreads.com