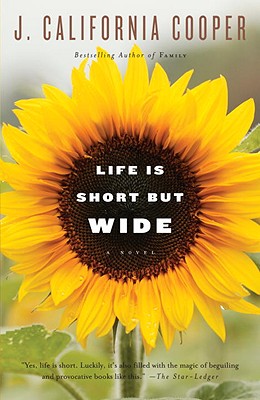 Share:
Beloved writer J. California Cooper has won a legion of loyal fans and much critical acclaim for her powerful storytelling gifts. In language both spare and direct yet wondrously lyrical, LIFE IS SHORT BUT WIDE is an irresistible story of family that proves no matter who you are or what you do, you are never too old to chase your dreams.
Like the small towns J. California Cooper has so vividly portrayed in her previous novels and story collections, Wideland, Oklahoma, is home to ordinary Americans struggling to raise families, eke out a living, and fulfill their dreams. In the early twentieth century, Irene and Val fall in love in Wideland. While carving out a home for themselves, they also allow neighbors Bertha and Joseph to build a house and live on their land. The next generation brings two girls for Irene and Val, and a daughter for Bertha and Joseph. As the families cope with the hardships that come with changing times and fortunes, and people are born and pass away, the characters learn the importance of living one's life boldly and squeezing out every possible moment of joy.
Cooper brilliantly captures the cadences of the South and draws a picture of American life at once down-to-earth and heartwarming in this-as her wise narrator will tell you-"strange, sad, kind'a beautiful, life story." It is a story about love that leads to the ultimate realization that whoever you are, and whatever you do, life is short, but it is also wide.