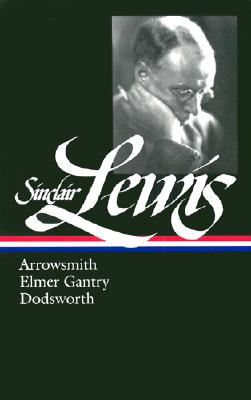 Share:
Written at the height of his powers, the three novels included in this Library of America volume continue the vigorous unmasking of the pretenses and hypocrisies of American middle-class life that Sinclair Lewis began in Main Street and Babbitt. The social sweep and descriptive power of Lewis’s fiction earned him international recognition as a chronicler of his times, and in 1930 he was awarded the Nobel Prize in Literature, the first American thus honored.

In Arrowsmith (1925), Lewis portrays the medical education and career of Martin Arrowsmith, a physician who finds his commitment to the ideals of his profession tested by the greed and opportunism he encounters in private practice, public health work, and scientific research. The novel reaches its climax as its hero faces his greatest medical and moral challenges amid a deadly outbreak of plague on a Caribbean island. Arrowsmith was awarded the Pulitzer Prize, which Lewis refused to accept.

Elmer Gantry (1927) aroused intense controversy with its brutal depiction of a hypocritical preacher in relentless pursuit of worldly pleasure and power. Through his satiric examination of evangelical religion, Lewis captures the growing cultural and political tension during the 1920s between the forces of secularism and fundamentalism. Gantry, with his glib eloquence and behind-the-scenes self-indulgence, has become an archetypal figure in American culture.

Dodsworth (1929) follows Sam Dodsworth, a wealthy retired Midwestern automobile manufacturer, as he travels through England, France, Germany, and Italy with his increasingly restless wife, Fran. The novel intimately explores the unraveling of their marriage while pitting the proud heritage of European high culture against the rude strength of ascendant American commercialism.

LIBRARY OF AMERICA is an independent nonprofit cultural organization founded in 1979 to preserve our nation’s literary heritage by publishing, and keeping permanently in print, America’s best and most significant writing. The Library of America series includes more than 300 volumes to date, authoritative editions that average 1,000 pages in length, feature cloth covers, sewn bindings, and ribbon markers, and are printed on premium acid-free paper that will last for centuries.