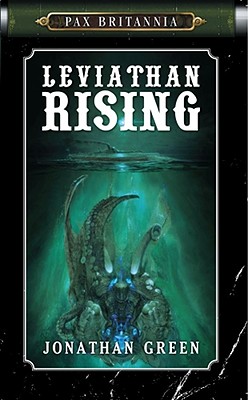 Share:
In the closing years of the 20th century the British Empire's rule is still going strong. Queen Victoria is about to celebrate her 160th birthday, kept alive by advanced steam technology. London is a fantastical sprawling metropolis where dirigibles roam the skies, robot bobbies enforce the law and dinosaurs are on display in London zoo. Welcome to Magna Britannia, a steam driven world full of fantastical creations and shady villains. Here dashing dandies and mustachioed villains battle for supremacy while below the city strange things stir in the flooded tunnels of the old London Underground. Around the world in eighty days in style! This proud claim, made by the Carcharodon Shipping Company, is about to be put to the test as its newest and most magnificent submersible cruise liner, the Neptune, sets sail on its maiden voyage around the world. Among the great and the good who have been invited to join this historic cruise is Ulysses Quicksilver, dandy adventurer and hero of Magna Britannia, enjoying a well-deserved sojourn after the traumatic events of Queen Victoria's 160th jubilee celebrations. But something is waiting in the depths. Something that threatens the Empire itself!