Letters for a Spy / The Sentimental Spy — Alice Chetwynd Ley 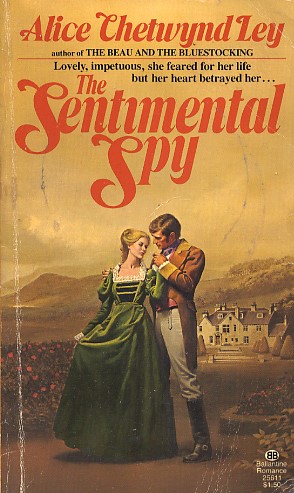 Share:
Lovely, impetuous, she feared for her life but her heart betrayed her...

Charming, independent Elizabeth Thorne was delighted to be spending the summer in Sussex--and she was pleasantly surprised upon arrival to find former beau Robert Farnham a guest at the same inn. But when the man who had once been her fiance pretended not to recognize her, Elizabeth feared something was terribly wrong.

Good sense told her that her safety was at stake, yet she could not ignore the desires rekindled within her. Why was he following her every move--and why has Elizabeth come under suspicion as a spy from the man who once knew her best?

Has he really forgotten they were once passionate lovers?

LETTERS FOR A SPY

Twenty-Five and unmarried, Elizabeth Thorne decided to assert her indpendence. She would spend the summer visiting Crowle, the Sussex manor house bequeathed to her by an uncle. When Elizabeth set out from London by mail;-coach, she was delighted by the prospect of a quiet spell in the country. But at Lewes, where she put up for the night, she was puzzled by the behaviour of Mrs Wood, a fellow traveller. Why was the woman so intrigued by the mention of Crowle? What was her connection with the sinister pedlar at the inn? And why had a letter addressed to Crowle Manor been mysteriously put into Elizabeth's guide book?

Robert Garnham, a former admirer, was also a guest at the inn and Elizabeth was pleased to see a friendly face. But for some reason he was suddenly very suspicious of Elizabeth. And it was then she began to realise that her plans for a peaceful country summer were unlikely to be fulfilled...