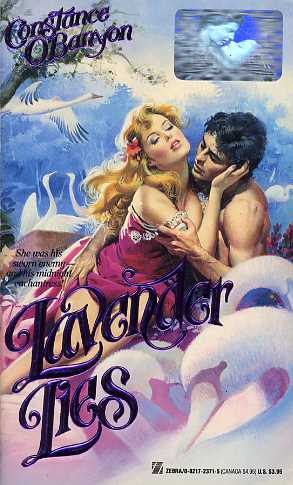 When aristocratic Julian Westfield learned that the "Swallow" had caused his brother's disgrace and death, the vengeful young lord swore the conniving colonial wench would pay for her tricks. Determined to snare her in her own trap, Julian let it be known he had valuable information for the elusive female spy, the bloodthirsty Briton fully intended to hear the "Swallow's" last song -- and see her dance at the end of a rope. But when the golden-haired beauty with lavender eyes appeared for their rendezvous, Julian was enchanted ... and could think only of locking her in the cage of his embrace!

SHE'D PUT HIM IN HIS PLACE

Patriotic Lavender Daymond knew the raven-haired Englishman would endanger her mission from the moment she saw him. His intense brown gaze followed her swaying hips with too much hunger. His finely chiselled lips smiled too familiarly as she glanced his way. And his powerful muscled body was too much a temptation to resist! Still the spirited American agent felt she had to conquer him to prove her commitment to the Colonies. But when Julian tasted her trembling lips and traced her slender form, the "Swallow" took flight leaving only a woman who craved the sweet fulfillment of her lavender lies.