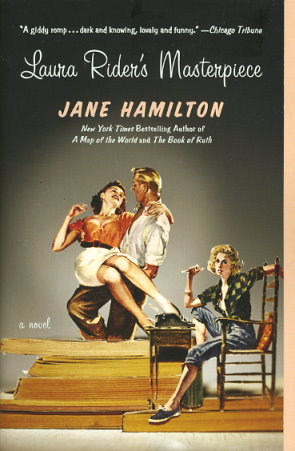 Share:
Jane Hamilton's novels have won numerous awards, including the PEN/ Hemingway for first fiction, and two of her books were selections of Oprah's Book Club. Though her earlier stories are laced with humor, Hamilton tackles out-and-out comedy for the first time with LAURA RIDER'S MASTERPIECE -- and the critics haven't stopped laughing yet.

Laura and Charlie Rider have been married for twelve years, running a nursery in picturesque Hartley, Wisconsin. And though they no longer share a bed they are happy enough: Laura with her writing hobby, and Charlie with his zeal for life in general.

Jenna Faroli is the host of a popular radio show and "the single most famous person in their town," in Laura's eyes. After Jenna happens to cross Charlie's path and they begin an e-mail correspondence, how can Laura resist using his identity to try out her literary skill and converse with her hero? Together, Laura and Charlie craft florid, strangely intimate messages that entice Jenna in an unexpected way ... and quickly spin out of control with hilarious, poignant, and memorable results.