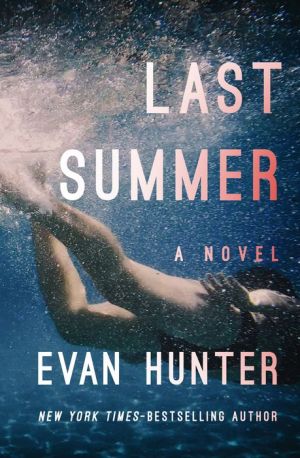 Three teenagers turn an idyllic summer vacation into a violent nightmare in this compelling and unforgettable novel by the bestselling author of The Blackboard Jungle ( Harper's ). Bored, restless, privileged teenagers Sandy, David, and Peter meet while vacationing with their families on remote Greensward Island. The two boys, both sixteen, are immediately entranced by Sandy's beauty and frank sexuality. Over the course of the summer, the trio creates an illicit teenage paradise far removed from adult supervision. Stolen beers and lustful teasing lead to more nefarious games, however, when Rhoda appears. Shy, quiet, and unsophisticated, the fifteen-year-old desperately wants to fit in with her more glamorous peers. Her awkwardness brings out a vicious cruel streak in Sandy, who has David and Peter so tightly wrapped around her finger they'll do whatever she wantseven if it means destroying an innocent life. A fearless, unflinching portrait of youth gone wild, Last Summer was the basis for an Academy Awardnominated film starring Barbara Hershey, Bruce Davison, Richard Thomas, and Catherine Burns. Originally published in 1968 and heralded by Cosmopolitan as the most chilling novel of thisor anyautumn, Last Summer transforms a coming-of-age story into a dark and twisted fable and confirms Evan Hunter's reputation as a master of suspense.
Reviews from Goodreads.com