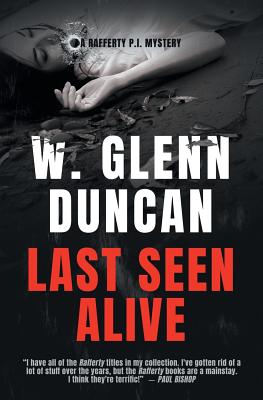 Share:
Rafferty. Tough. Clever. Cynical. An ex-cop, a deadly shot, a man who plays by his own rules. As comfortable in big-bucks Dallas as he is on the violent prairies five minutes out of town. Steady date: sexy antique dealer Hilda Gardner. Good buddy: Cowboy, the most dangerous man on earth.

Rafferty: Last Seen Alive. Cindy was cute, followed the Dallas Cowboys, and listened to jazz, so Rafferty had flirted with her. Hell, why not? Late night in a small town Texas bar, with his Hilda many miles away. It wasn't as if he had slept with her. Or killed her. But that's not what Sheriff Surbitter must have thought, or why would his goons have hauled Rafferty in on a murder rap? Must not have been what born-again Bert McLaren thought, either. He tried evangelizing Rafferty's head with a steel pipe. And why doesn't Rafferty just blow this pissant town for the familiar streets of friendly Dallas? Too much fun to be had.