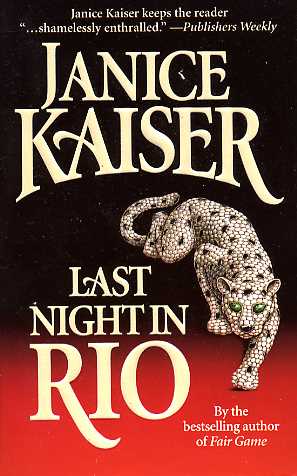 Serena Bouchard had done it again. She'd blown into his life without warning and conned him with her irresistible charm. The fact was Michael Hamlin had never been able to deny his ex-wife anything.

Serena's brother, Jeffrey, was in jail in Brazil, accused of his lover's murder. Michael would go with her to Rio and help clear Jeffrey ... then get the hell away from Serena. Because the reality was that they were trouble together -- they always had been.

But in sultry, dangerous Rio, there were no rules. And amidst the corruption, dark secrets, unknown enemies and endless temptations, Michael and Serena had only each other. The truth was they were getting close to the killer -- they only had to survive their LAST NIGHT IN RIO.