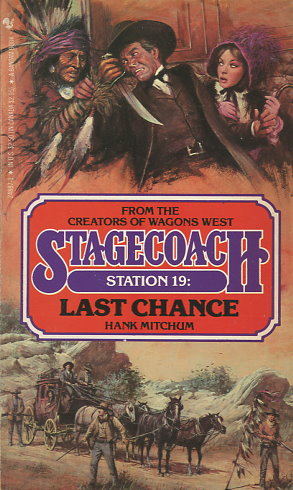 Share:
STAGECOACH -- A powerful series of adventures set in the West's most dramatic towns -- filled with the danger, history and romance of the bold men and women who conquered the frontier.

The Butterfield stagecoach from Atchison to Denver was trouble just waiting for a place to happen. Indian uprisings had left a corpse-strewn trail throughout the Colorado territory. For lovely Kelly O'Brien. the stage to Denver represented a new life after the sudden death of her father. What she never expected was that along the way her heart would be stirred by rugged Dan Sullivan. a Civil War veteran blinded by a tragic rifle accident. Throughout the long arduous journey, against war-hungry Kiowa and ravenous wolves, Dan proves that his courage knows no handicap. But when Indians shoot the stage driver and shotgunner at Last Chance, Colorado, the fate of the entire stagecoach is left to Sullivan...and to the feisty Irish lass who now faces the most important decision of her life.