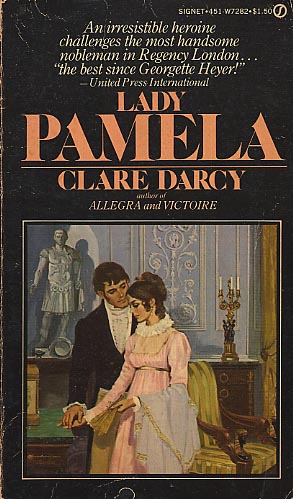 A SCANDALOUSLY UNCONVENTIONAL MIND OF HER OWN

Bewitching young Lady Pamela Frayne had but one fault--a fault grave enough to make her the talk of glittering London society. This exasperatingly headstrong beauty refused to heed the best advice or accept the sternest orders, no matter what the consequences to her social position and physical safety.

She was the despair of her distinguished if dull fiance, Lord Babcoke, who was shocked by her flouting of the conventions. She was a worry to her powerful grandfather, who warned her not to meddle in affairs of state and perilous international intrigue. And she was an irresistible challenge to handsome, mysterious Lord Dalven, a nobleman of many moods and masks, who had known only easy conquests on the fields of love-- until he met and tried to master -- Lady Pamela
------------------------
UK Edition

Lady Pamela Frayne was utterly charming and dangerously high-spirited. When she tried to retieve a missing government document from Whiston Castle, because her brother's honour depended upon it, she was little short of foolhardy. First she tried to pesurade a devilishly handsome coachman, encountered quite by chance in a snowstorm, to join her intrigue. When this ploy failed, she disguised herself as a lady's maid, repressing her imperious manner with some difficulty and gained admittance to the castle.

She was most disconcerted when the coachman arrived at the castle and announced himself as Lord Dalven. She found his uncanny ability to pass himself off as a gentleman almost as fascinating as the whereabouts of the document. Her escapade was turning out to be both more alarming and more significant than she could possibly have imagined.