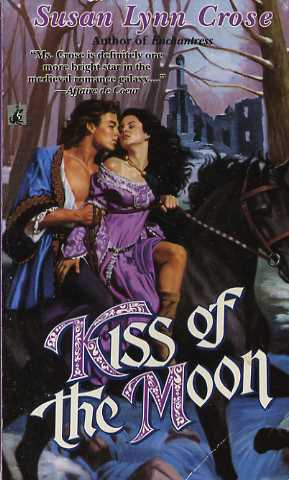 THE PROPHECY
With hair black as the raven's wing and eyes the blue of midnight, Lady Sorcha of Castle Prydd bore the birthmark called "The Kiss of the Moon." The common folk whispered she was the one chosen by the old golds to save them. For that reason -- and for her beauty -- the laughing, mischievous Sorcha was called a dangerous woman by her own brother, who would betray her, and by a man whose face haunted her dreams....

THE OUTRAGE
His eyes gold as a lion's, his anger burning at white heat, Lord Hagan of Erbyn rode home from war to find his twin, Darton, had committed a grievous act -- he had tried to kidnap Sorcha of Prydd and snatched her younger sister Leah instead. Now, a pretty she-cat, dagger in hand, had entered his bedchamber in a rescue attempt, and when his strong hand closed over hers and his lips claimed her mouth with a man's brazen hunger, he knew that Sorcha, with her Kiss of the Moon, was his sun, his stars, his fate.
THE DESIRE
With their families avowed enemies, Sorcha swore to hate the powerful lord who imprisoned her in Castle Erbyn. Yet she was drawn into his arms and his bed by a force greater than her will ... as if in the misty long ago their union was chosen as the sword to fight injustice, as heaven's proof of the invincible power of love.
Reviews from Goodreads.com