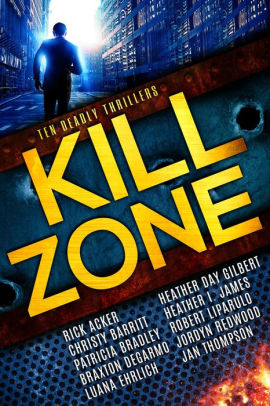 
For fans of inspirational and Christian Thrillers! Here are ten brand-new, never-before-published novellas of suspense, intrigue, and thrills from ten of your favorite authors. This special anthology is available for a limited time only!

by Christy Barritt
A car crash on a lonely road turns into a nightmare for Andie Meadows when she’s abducted by a serial killer. When the killer begins his terror again years later, she’s the only one who can help the FBI find him before he strikes again.

by Patricia Bradley
Murder becomes a case of mistaken identity at a remote drug rehab. An old threat resurfaces, and Andi Hollister finds herself in the crosshairs of a killer.

by Braxton DeGarmo
An explosion kills three well-known thugs, and Detective Seamus O’Connor is assigned to a task force to assist the FBI with the investigation. When two more explosive devices target criminals who have escaped justice, the hunt turns its focus on finding a vigilante. But when O’Connor starts getting close, the vigilante begins to hunt him.

by Luana Ehrlich
When CIA intelligence officer Titus Ray attempts to recruit an Iranian nuclear scientist in Tehran, he puts himself in the crosshairs of the Iranian secret police and triggers a series of events leading to deadly consequences.

by Heather Day Gilbert
When Marine sniper-turned-lumberjack Zane Boone finds himself in the crosshairs of vengeful terrorists, will he be able to protect Molly McClure and save his own heart in the process?

by Heather I. James
Charlotte finds herself at the end of a prison term for committing a felony against a man who deserved it. Upon her release, she finds that he is coming after her. Not for revenge but because he believes she has something of his, something that could put him away for life and topple a criminal enterprise.

by Robert Liparulo
After a lifetime of obsession, a vast fortune, and countless murders, Anton Talisen is on the brink of unleashing a powerful, ancient secret against mankind. Hutch has three days to stop him.

by Jordyn Redwood
Bestselling thriller author Lexie Sloan’s life upends when people close to her wind up dead, mirroring the plots of her award-winning novels. Is she the killer? Or is someone out to frame her?

by Jan Thompson
She opens a case she cannot close.
If he helps her solve it, he will die.
FBI Special Agent Stella Evans finds the last surviving computer consultant who holds the key to destroying a terrorist organization’s global network, but Cayson Yang may not live long enough to dismantle the computer system.