Just the Way You Want Me — Nora Eisenberg 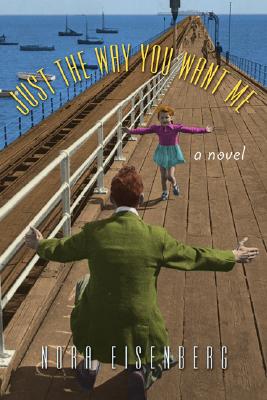 Share:
One year after her stunning debut with The War at Home ("Remarkable. Poignant and unforgettable."—Library Journal, starred review), Nora Eisenberg returns with a gripping and humorous new novel about a daughter’s search for the truth about her father.
Suzy Vogel is in her mid-40s. With one failed marriage already behind her, she is simply unable to commit, to a great guy who wants to tie the knot, to a great job as a New York City magazine reporter. Sexually pliant, gen-erous to a fault, her own best interests always come last. When, on the eve of a new life, she discovers that her father, a charismatic ex-convict always in and out of prison for his political organizing, is not buried in the family plot, indeed may not be dead at all, she’s compelled to begin a cross-country journey that leads her to the truth about his heroic altruism and an understanding of the obsessions to please people and to "blend in" that have thwarted her attempts at happiness all her life.
Combining a warm, street-wise voice reminiscent of the early Grace Paley, breathtaking twists of plot, compassionate but outrageous characterizations and a harrowing cross-country bus trip from Ft. Lauderdale to the Santa Monica Pier, Just The Way You Want Me explores the cultural legacies of deeply committed political families and the life-long struggles of their children to measure up to their parents’ idealistic dreams.
Nora Eisenberg’s first novel, The War at Home, won enthusiastic acclaim from critics nationwide. She is a Professor of English at the City University of New York (La Guardia) and the co-author of four influential text books on writing. Her short fiction and prose have appeared in The Partisan Review, The Village Voice, Choice, Tikkun and the Los Angeles Times. She lives in Manhattan.