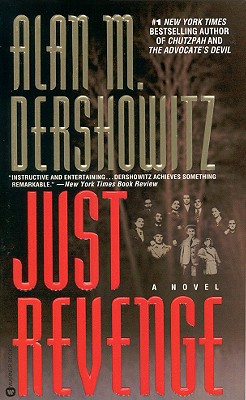 One of the foremost courtroom lawyers of his generation, Alan M. Dershowitz takes controversial stands based on the principle of equal justice for all. Along the way, he has authored the #1 New York Times bestseller Chutzpah; the bestselling account of the Claus von Bulow case Reversal of Fortune; and the bestselling courtroom drama The Advocate's Devil. Now Dershowitz has written a novel that is at once personal, passionate, and towering: an explosive legal thriller that pits Dershowitz's literary alter ego, attorney Abe Ringel, against the worst crime of the twentieth century-the Holocaust.
What if you witnessed the most abominable deeds that human beings can inflict upon each other? What if you came face-to-face with the very man who had slaughtered your family before your eyes? That is the question confronted by a celebrated professor named Max Menuchen. Max has found the man who had killed his entire family in cold blood more than a half century before. Max, who has never before broken a law, cannot turn down his chance for revenge.
In 1943 Marcellus Prandus was a Lithuanian militia captain who carried out the bloodthirsty orders of his Nazi commanders during World War II. Today he is an old man living outside Boston. For Max, who has discovered Prandus's identity by chance, killing him is not enough, because Prandus is already dying of cancer. How can Max make Prandus suffer exactly as Max himself did? Can Max bring himself to assassinate Prandus's children and grandchildren and make the old man watch his family die, as Max himself was forced to do?
By the time defense attorney Abe Ringel enters the case, Max has carried out an astounding act of revenge, and America's great Holocaust trial has begun: an explosive legal and moral struggle to find the light of justice within the darkness of human evil. With Max facing almost certain conviction, Ringel desperately tries to prove his actions were justified. But this blockbuster trial is careening in a direction not even Abe can predict, giving new meaning to the ideas of both justice and revenge.
In JUST REVENGE, Alan Dershowitz fuses his insider's legal knowledge with the passions of a man who has been personally touched by the Holocaust. Thought-provoking, brilliantly human, and undeniably gripping, here is a tale that only Alan Dershowitz could tell-and that all of us must hear.