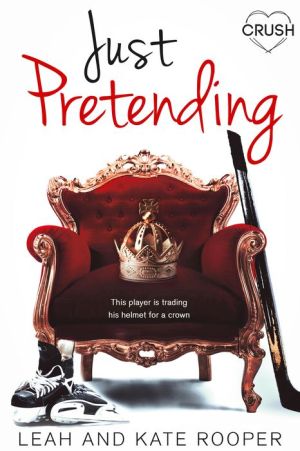 
It's not easy being royal. Sixteen-year-old Evangeline wears her crown proudly, but between her duties and her overprotective big brother, the idea of romance is just a dream. But a chance encounter in Chicago changes all that…. Sure, seventeen-year-old Tyler Evans loves playing hockey, but he's more concerned about providing for his dad and little sister. Then he meets Eva--and falls head-over-heels in love—and he has two more problems. One, she's his best friend's little sister. Two, she wears a crown.But then Eva accidentally mistakes Tyler for a visiting prince, and for the first time, Tyler doesn't feel like a nobody. He knows he has to tell her the truth…but not yet. His plan? To keep up the royal charade as long as it takes to convince Eva he’s the guy for her. Even if he’s lying to everyone…including himself.Disclaimer: May cause disillusionment. Those girls looking to find their Prince Charming might consider scouting out hockey rinks.Each book in the Chicago Falcons series is STANDALONE:* Just One of the Boys* Just One of the Royals* Just Pretending