Just Over the Horizon — Greg Bear 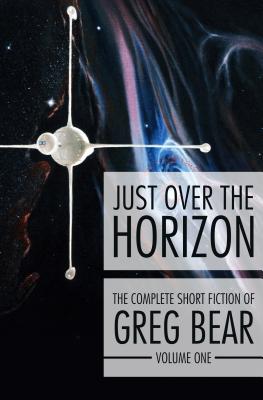 Greg Bear -- author of Queen of Angels, Eon, and Hull Zero Three, among many other hugely popular novels -- has an ability to transform challenging scientific concepts into gripping fiction that has won him numerous awards and an avid following. He has written novels about interstellar war, human evolution, intelligent bacteria, international terrorism, and the exploration of deep space -- but he doesn't stop there. This brilliant collection of Bear's stories, each newly revised by the author, proves he is a master of the short form as well. Just Over the Horizon offers thirteen mind-bending explorations of the near future ... or just beyond the border of conventional reality. The volume includes:

--“Blood Music,” a Hugo and Nebula award-winning classic and the basis for the novel of the same name -- and the first science-fictional exploration of nanotechnology;
--“Sisters,” in which high school students find maturity and family by confronting a tragic genetic destiny;
--“Tangents,” winner of the Hugo and Nebula Awards, about a persecuted scientist who seeks refuge in a better world;
--“Dead Run,” a tale of union truck drivers ferrying souls through Death Valley into Hell, adapted for an episode of the television series The Twilight Zone;
--“Sleepside Story,” which Bear calls one of his favorite pieces, an urban fantasy tale that takes a music student by Night Metro to the Sleepside mansion of a magical woman of the night, inverting “Beauty and the Beast” in a very modern mirror;
--“Genius,” the screenplay written for the television series Outer Limits, but never produced.

Just Over the Horizon combines Bear's intense concern with the human condition with a deep understanding of science, resulting in a collection long to be remembered.
Reviews from Goodreads.com