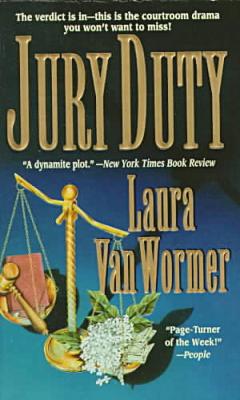 JAMES BENNETT LAYTON, JR., HAS BEEN CHARGED WITH THE BRUTAL MURDER OF SISSY COOK, A BEAUTIFUL YOUNG MODEL HIS MONEY COULDN'T BUY. DUBBED THE "POOR LITTLE RICH BOY" CASE, THIS NOTORIOUS TRIAL WILL CHANGE FOREVER THE LIVES OF THE TWELVE NEW YORK CITY RESIDENTS CALLED TO THE JURY.

LIBBY WINSLOW - Her career as a novelist is in trouble and serving on the jury couldn't come at a worse time. But the experience will alter the course of Libby's life, exposing her to both danger and her heart's desire.

WILLIAM KLEIN - Everybody at his Wall Street firm thinks he's crazy not to get out of jury duty, but for William, it's an easy way to avoid with dealing with a messy relationship that's ending. Then he falls in love with another woman and becomes the target of a jealous lover.

MELISSA GRANT - A dynamic advertising executive, Melissa is nearing burnout...both professionally and personally. Her time as a juror forces her to take a long, hard look at her life and to make some decisions about her happiness.

As the jury sits day after day, sifting through conflicting testimony and sketchy evidence, this group of diverse strangers must decide the fate of one man. But in the process, their own futures are jeopardized. Because someone on the jury has his own agenda....
Reviews from Goodreads.com