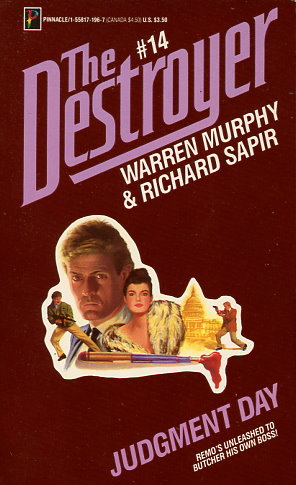 Remo Williams has just received his first assignment from the new director of CURE: to permanently dispose of the old director of CURE! This particularly sticky setup has death-master Chiun and his prized pupil at odds with each other. The ancient Sinanju assassin is reluctant to bite the hand that feeds them...while Remo's ready and willing to smite the man that leads them!

The Destroyer's determined to do his duty for the "Agency That Doesn't Exist:" But before he plants his former employer six feet under, Remo's going to make sure that no enemy weasel has violated CURE security. And if one has, there's going to be hell to pay on Judgment Day!
Reviews from Goodreads.com