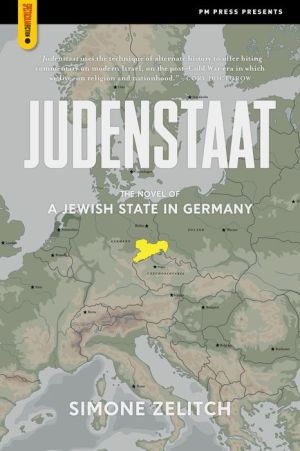 Simone Zelitch has created an amazing alternate history in Judenstaat. On April 4th, 1948 the sovereign state of Judenstaat was created in the territory of Saxony, bordering Germany, Poland, and Czechoslovakia.

Forty years later, Jewish historian Judit Klemmer is making a documentary portraying Judenstaat's history from the time of its founding to the present. She is haunted by the ghost of her dead husband, Hans, a Saxon, shot by a sniper as he conducted the National Symphony. With the grief always fresh, Judit lives a half-life, until confronted by a mysterious, flesh-and-blood ghost from her past who leaves her controversial footage on one of Judenstaat's founding fathers--and a note:

"They lied about the murder."

Judit's research into the footage, and what really happened to Hans, embroils her in controversy and conspiracy, collective memory and national amnesia, and answers far more horrific than she imagined.
Reviews from Goodreads.com