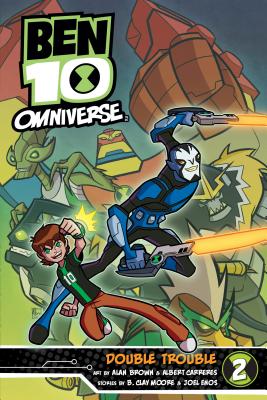 BEN 10 is one of the best-selling boy's action franchises of all time! OMNIVERSE brings together the best of all Ben 10 series with new adventures in both the past and present, new villains and all new mysteries!

For more than five years, Ben Tennyson has been saving the universe with his Omnitrix, which allows him to use the DNA of aliens to take on heroic new forms. But he's never encountered a challenge quite like this! Teamed up with a new partner, Rook, who seriously needs to relax, Ben investigates the mysteries of a hidden underground alien city and has to battle a new enemy, Khyber, who has only one thing on his mind: hunting down Ben 10!

In “Tim 10,” Ben's aliens seem to be causing all kinds of trouble in Undertown. But Ben doesn't remember doing any of it...or changing into the aliens at all. Something's not right, but what? Ben better find out before his reputation is ruined for good! And in “Down in the Dumps,” Ben finds out that being a superhero doesn't always get you the respect you deserve when he tries to teach a class of plumber recruits at the academy...and ends up getting them all into a heap of trouble.

Reads L to R (Western Style) for all ages.
Reviews from Goodreads.com