Joy In His Heart — Kate Welsh 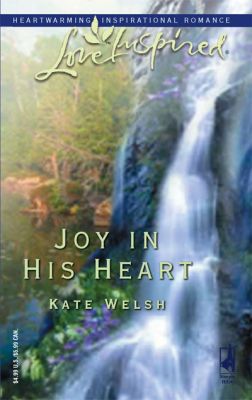 Headstrong Joy Fuller knew she could never marry Brian Peterson. A brilliant doctor, Brian always wanted a society wife, not a tomboyish pilot. That's what Joy told herself twelve years ago when their breakup left her brokenhearted. After years of avoiding him, the two are thrown together on a seemingly routine rescue mission.

But when her aircraft goes down in the Adirondacks, their very survival depends on whether they both can get over past hurts and work together. If they can stop quarreling long enough, they might even just see that they're both still hopelessly in love.
Reviews from Goodreads.com

I have enjoyed every one of Kate Welsh's books. This is the last in a series of eight for Laurel Glen, but it was my least favorite. It was more disconnected than any of the other books. There was a lot of 'thinking' and details. I think that's what really made the story drag. It also seemed longer than her other books...

The story was a good one. It's about a angel flight pilot, Joy, and her ex-boyfriend. She was helping him transport one of his child patience when they crashed on the way back while they were searching for five lost children in the woods. The story was about survival. They were out there all on their own. She was injured. then they found the children and had to find a way to get them all home safely.

Joy's tendancy to cut Brian off when he's trying to explain himself really got on my nerves. I thought she was way to hard on him and didn't want to understand where he was coming from. Brian did a great job trying to take care of Joy.

In the end, it all worked out of course...