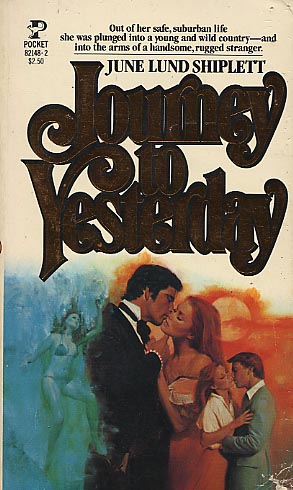 A TWENTIETH-CENTURY WOMAN ON A NINETEENTH-CENTURY ODYSSEY OF PASSION AND DANGER!

The men at the party couldn't take their eyes off Stacey as the stunning redhead jackknifed into the swimming pool. But suddenly, mysteriously, she was gone, torn from her husband and daughters in Cleveland and thrust into the untamed pioneer days of America's past.

Frightened and bewildered at first, Stacey felt safer when she became governess to handsome. Ben Clayton's two motherless children. When he proposed to make the perilous journey out West by covered wagon, she agreed to go. But Stacey didn't know the depth of her desire for Ben, nor the savage excitement that awaited her.

Would she ever return to her safe and comfortable life in the twentieth century? Or did her destiny now lie in the past with a love as strong and powerful as the one she left behind?
Reviews from Goodreads.com