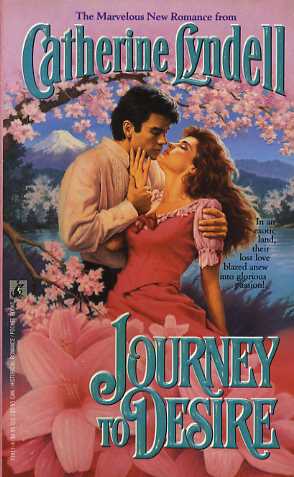 In an exotic land, their lost love blazed anew into glorious passion!

FATE HAD ONCE TORN THEN FROM EACH OTHER...BUT A LOVE SO SPLENDID COULD NEVER DIE

Despite the fire glowing in her windblown hair and defiant heart, Tessie Gallagher had yet to find true happiness in a man's arms. When she arrived in the mysterious land she had dreamt of since childhood, she was stunned to encounter the love of her wild-hearted youth. Tessie vowed not to give the handsome enigma called Jason Lancaster the chance to hurt her again...as he had done in far-off San Francisco ten years before.

But the sudden disappearance of her favorite uncle forced her to accept Jason as her guide through a perilous mountain terrain. Traveling with him deep into misty realms, Tessie risked danger from her uncle's enemies...and from the tender feelings aroused in her by Jason's potent charm.

Unable to restrain the rush of yearnings, she gave herself to him in passion's abandon. Yet as her body tasted exquisite pleasure, Tessie was tormented by fear. Their love seemed wondrously reborn...but a new betrayal might be waiting behind Jason's fervent embrace!
Reviews from Goodreads.com