Journey to a Star — Barbara Cartland 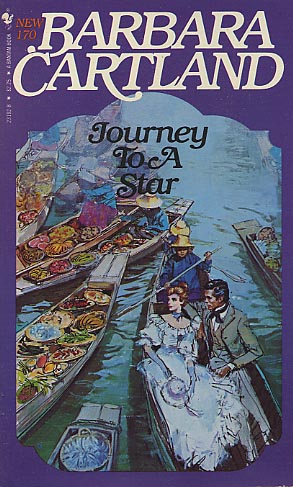 1894. The Marquis of Oakenshaw is asked by the Foreign Secretary to visit Siam to reassure the King who has been upset by Britain and France quarrelling over the frontiers. A dashing, wealthy and handsome bachelor, the Marquis asks several friends to accompany him on his yacht.

"For every man there is a woman in his life who inspires and leads him like a star," the Marquis said. Tarina looked at him in surprise, and he said: "It is true, is it not, that you have never been kissed?"

"Of course I have not," Tarina said.

"That is what I thought," he said, "so let us start from the beginning. I will find a way so that we shall not lose each other."

Quite suddenly she felt lost, like a child crying alone in a desert. Because at this moment the Marquis's hand holding hers was like a lifeline in a rough sea, she held onto him.

It suddenly struck her that if he should put his arms round her and hold her close to him, she would feel safe and protected from everything else in the world... Then as she saw the jetty of the Oriental Palace ahead of them she knew that what she was feeling was love. Love!
Reviews from Goodreads.com