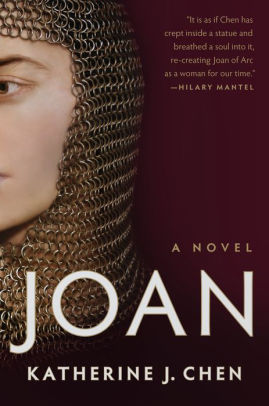 Share:
Girl. Warrior. Heretic. Saint? From the acclaimed author of Mary B comes a stunning, secular reimagining of the epic life of Joan of Arc.

1412. France is mired in a losing war against England. Its people are starving. Its king is in hiding. From this chaos emerges a teenage girl who will turn the tide of battle and lead the French to victory, becoming an unlikely hero whose name will echo across the centuries.

In Katherine J. Chen's hands, the myth and legend of Joan of Arc is transformed into a flesh-and-blood young woman: reckless, steel-willed, and brilliant. This meticulously researched novel is a sweeping narrative of her life, from a childhood steeped in both joy and violence, to her meteoric rise to fame at the head of the French army, where she navigates the perils of the battlefield and the equally treacherous politics of the royal court. Many are threatened by a woman who leads, and Joan draws wrath and suspicion from all corners, while her first taste of fame and glory leaves her vulnerable to her own powerful ambition.

With unforgettably vivid characters, transporting settings, and action-packed storytelling, Joan is a thrilling epic, a triumph of historical fiction, as well as a feminist celebration of one remarkable -- and remarkably real -- woman who left an indelible mark on history.