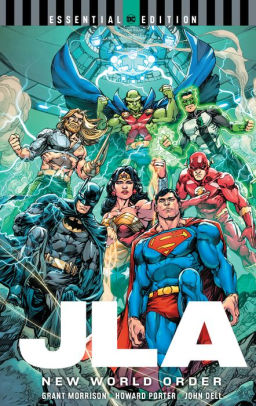 The Big seven are reunited. Superman, Batman, Wonder Woman, Green Lantern, the Flash, Aquaman and Martian Manhunter--the quintessential Justice League--are back, but have they been replaced already? The Hyperclan have arrived on Earth, seemingly to save it. But nothing is quite as it seems in this new DC Essential Edition of Grant Morrison's classic graphic novel!

The action begins as the JLA reunites to stop the Hyperclan, but Earth's heroes quickly realize they have come in peace. Halting civil wars and vanquishing famine, the world begins to hail these new protectors. But the Dark Knight knows better. After Batman discovers their shocking true nature, it's up to the World's Greatest Super Heroes to stop them!

The DC Essential Edition series of graphic novels highlights the best standalone stories the medium has to offer, featuring comics' greatest characters. These trade paperback editions focus on the easiest entry points DC has in its vast library, with seminal, groundbreaking tales that transcend the printed page. Start with the Essentials.
Reviews from Goodreads.com