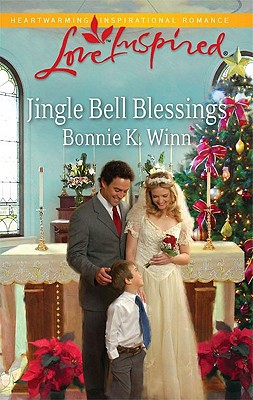 All Jimmy Evans wants for Christmas is a family. And Chloe Reed's mission is to get him one. But when Chloe and the orphaned boy land on distant relative Evan Mitchell's doorstep, they come face-to-face with a real-life Scrooge. Haunted by a tragic past, Evan wants nothing to do with them -- or with Christmas. But little by little, one adorable seven-year-old and a spunky young woman chip away at Evan's heart of stone and bring the holiday spirit back into his home. Will these three strangers become a true family by Christmas?

I enjoyed this book very, very much! I always like it when a book starts out with the couple fighting, as it did in this one. You just know there will be a lot of drama and a lot of time to make up when it's like that - and there was! The moment that Chloe knocked on Evan Mitchell's front door, she knew she would have her work cut out for her. Something she thought would be an easy task soon looked next to impossible! After all, what young man could resist taking little seven year old Jimmy in to raise - especially when they were related? But Chloe didn't know that in Evan's past, he had his heart broken by another little boy!

There were several excellent scenes in this book. Two that come to mind are the explosion and Christmas evening. Another great scene is when Evan confronted Chloe in her office. I ached for Evan's loss - couldn't imagine what a loss like that would be...hope I never know. It's totally understandable for him to react the way he did.

This book held so much hope and so much promise. From the very first word that left me excited for a dramatic read, to the very last sentence that discussed love found...I was hooked! This is one of those books you will want to read cover-to-cover.

The author matched Chloe up to a new best friend - Grace - who's story was covered in [[ASIN:0373872291 Promise of Grace (Love Inspired #222)]]. It made a great match, and in the epilogue, we get a view that Grace's life wasn't perfect after her marriage. They had struggles, one of which was fulfilled at the end...

By the way, in the last two books, the author has referred to the preacher as "the preacher." I'm not sure why Kathleen isn't named, but it did bother me a bit that she dropped this character who started the whole series.