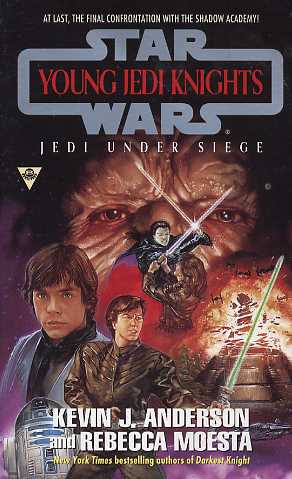 When the Empire died, they were born--a new hope for the New Republic. The young twins of Han Solo and Princess Leia are now fourteen, and enrolled at Luke Skywalker's Jedi academy on Yavin 4. Together with friends both old and new, the future heroes of an already legendary saga begin their training.

The day of reckoning is at hand for the young Jedi Knights. The Shadow. Academy--with its army of Dark Jedi and Imperial stormtroopers--has appeared in the sky over Yavin 4. And when a commando raid destroys the shield generator protecting the Jedi academy, there is only one option: to fight.

Now Jacen and Jaina, along with Luke Skywalker and their friends, must trust in the Force and do battle with their sworn enemies--the Dark Jedi Zekk, his master Brakiss, and the loathsome Nightsister Tamith Kai. Victory means a new legacy of Jedi coming of age. Defeat means a final cloak of darkness over the entire galaxy...