Jane Austen Made Me Do It — Laurel Ann Nattress 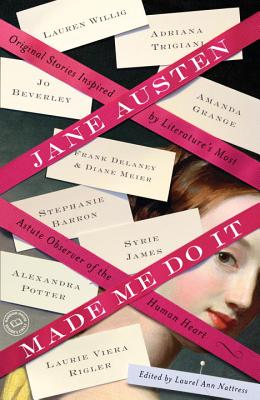 "My feelings will not be repressed. You must allow me to tell you how ardently I admire and love you." If you just heaved a contented sigh at Mr. Darcy's heartfelt words, then you, dear reader, are in good company. Here is a delightful collection of never-before-published stories inspired by Jane Austen -- her novels, her life, her wit, her world.

In Lauren Willig's "A Night at Northanger," a young woman who doesn't believe in ghosts meets a familiar specter at the infamous abbey; Jane Odiwe's "Waiting" captures the exquisite uncertainty of Persuasion's Wentworth and Anne as they await her family's approval of their betrothal; Adriana Trigiani's "Love and Best Wishes, Aunt Jane" imagines a modern-day Austen giving her niece advice upon her engagement; in Diana Birchall's "Jane Austen's Cat," our beloved Jane tells her nieces "cat tales" based on her novels; Laurie Viera Rigler's "Intolerable Stupidity" finds Mr. Darcy bringing charges against all the writers of Pride and Prejudice sequels, spin-offs, and retellings; in Janet Mullany's "Jane Austen, Yeah, Yeah, Yeah!" a teacher at an all-girls school invokes the Beatles to help her students understand Sense and Sensibility; and in Jo Beverley's "Jane and the Mistletoe Kiss," a widow doesn't believe she'll have a second chance at love . . . until a Miss Austen suggests otherwise.

Regency or contemporary, romantic or fantastical, each of these marvelous stories reaffirms the incomparable influence of one of history's most cherished authors.
Reviews from Goodreads.com

Jane Austen Made Me Do It: Original Stories Inspired by Literature's Most Austute Observer of the Human Heart.

*Jane Austen's Nightmare by Syrie James
As Jane finds herself in Bath, her characters show up and complain what Jane did wrong with them in her books. Only the Darcy's and Bingley's are content.
*Waiting: A story inspired by Jane Austen's Persuasion by Jane Odiwe
Anne Elliot & Captain Wentworth are thinking about what happened nine years ago as he once again goes to Anne's father to ask for her hand in marriage.
*A Night at Northanger by Lauren Willig
Ghost Trekkers TV show goes to check out the ghosts at Northanger Abbey. When Cate retires to her room early, after the power goes out, she meets the ghost. *Language
*Jane and the Gentleman Rogue: Being a fragment of a Jane Austen mystery by Stephanie Barron. Jane Austen helps Lord Harold as he tries to protect naval plans from getting to France. And she tries to protect him while he duels Lord Cecil.
*Faux Jane by Diane Meier and Frank Delaney writing as F.J. Meier
Nicola & Charles Scott help a spoiled actress and her fiance' Lord to get to the bottom of a autographed Jane Austen book she is paying a million dollars for.
*Nothing Less Than Fairy-Land by Monica Fairview
The Knightley's have their first trials when they return from their honeymoon and have to find a way that two men can both live under the same roof.
*Love and Best Wishes, Aunt Jane by Adriana Trigiani
Jane Austen writes a letter of congratulations to a niece on her engagement.
*Jane Austen and the Mistletoe Kiss by Jo Beverly
Jane Austen tells the story of the mistletoe bough to a widow and her three daughters.
That if kissing their one true love under the bough, their hearts will know.
*When Only a Darcy Will Do by Beth Pattillo
Elizabeth, an American in London. Is giving Jane Austen tours to make some extra money. No bites until Mr. Darcy shows up for the tour.
*Heard of You by Margaret C. Sullivan
From Persuasion; the story of how Captain Croft & Sophie Wentworth meet. They recap the story for Anne and tell her how Frederick was their matchmaker.
*The Ghostwriter by Elizabeth Aston
Charles left Sara, due to her unending love for Mr. Darcy. He left a locket with Jane's hair which brings Jane to Sara. She helps her with her book and Charles before leaving.
*Mr. Bennet Meets His Match by Amanda Grange
On the day of Jane & Lizzy's wedding John Bennet thinks back to the time of his parents pushing him to get married and how he chose Jane Gardiner.
*Jane Austen, Yeah, Yeah, Yeah! By Janet Mullany
Julie teaches as a all girls school, during detention with three girls she teaches them how exciting Jane Austen can be when she replaces the characters with the Beatles.
*Letters to Lydia by Maya Slater
Lydia Bennet's friend, Maria Lucas sends her letters. The first of them from her stay with the Collin's and reporting what she thinks is happening between Lizzy & Mr. Darcy.
*The Mysterious Closet: A Tale by Myretta Robens
Cathy is staying at an Abbey. She is given the Ratcliffe Suite in the haunted section. She meets Henry. Finally a man she could love, if he were only real rather than a ghost!
*Jane Austen's Cat by Diana Birchall
While her brother James is visiting at the small house, Aunt Jane takes time from writing to tell her nieces stories. This one happened to have cats as the characters.
*Me and Mr. Darcy, Again... by Alexandra Potter
Can Emily know if she truly loves Spike by spending time with Mr. Darcy, who really does not even exist. **Mild language
*What Would Austen Do? By Jane Rubino and Caitlen Rubino-Bradway
James Austen is in trouble at school, his parents are called in. His offense is... he is too polite. Blame it on a summer of English Country Dance and reading Jane Austen books.
*The Riding Habit by Pamela Aidan
Darcy has a passion for riding and he desires his wife at his side. Elizabeth has never conquered the feat. Unfortunately Hyde Park is a bit unruly on the day of her first ride.
*The Love Letter by Brenna Aubrey
After receiving a mysterious page from a book, a love letter. Mark finds it is from Persuasion. It sounded much like his love for Justine. Could he have a 2nd chance too?
*The Chase by Carrie Bebris
This is about Francis â€śFrankâ€ť Austen. Jane's brother who was about a year older than her. As he Captain's his ship in the Royal Navy.
*Intolerable Stupidity by Laurie Viera Rigler
A modern day trial to put all the writers and producers in the dungeon for how they have rewrote Mr. Darcy. Will Judge Lady Catherine De Bourgh even hear the defense?
**Received through NetGalley for Review