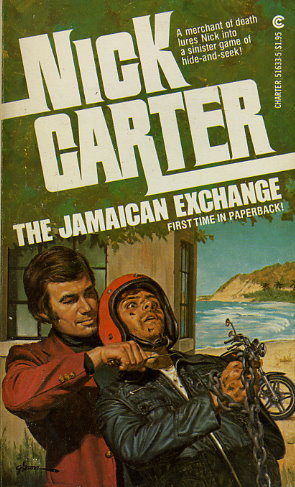 Hawk said "Find Jamba." AXE isn't exactly the Missing Persons Bureau, and Jamba's dossier would make your hair stand on end. Nick Carter knew what he had to do.

JAMBA had set up a system of barter -- guns for ganja. It's a great deal for the wrong side. The U.S. connection gets the drugs and the island insurrection gets its weapons. But who's Jamba?

MIRANDA says she doesn't know. She's just a nice girl trying to make a living. But at the rate she's going she won't live to reap the rewards.

DAVE KRAMER blew the whistle on Castro and made his mark as an ace journalist. He goes where the news is hot. So what's he doing in Jamaica?

JOE HALUS seems innocent enough. But when he rents Nick a chopper all hell breaks loose.

MALVERNE is respectable, a lover o. freedom. But why did he give Nick an inexperienced girl to guide him through the hills?

JOSINA, lovely as an island flower and just as innocent. Or is she? And who said Jamba has to be a man?
Reviews from Goodreads.com