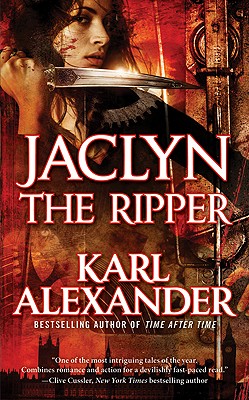 In Time After Time, H.G. Wells used his time machine to chase after Jack the Ripper who was on a killing spree in 1979 San Francisco. After H.G. met Amy Catherine Robbins, the love of his life, and banished the serial killer to the indefinite future, H.G. and Amy returned to 1893 London, believing they could live happily ever after.

But that wasn't the end of the story. In Jaclyn the Ripper, Amy returns to the present to tell her parents what happened to their missing daughter, accidentally freeing Jack from his prison in the far future while also transforming Jack into a woman. Jaclyn the Ripper sets out on a new killing spree in 2010 Los Angeles, vowing revenge on H.G. and Amy.

H.G. follows Amy to modern L.A., but neither he nor Amy knows Jaclyn is on their trail. In the brave new world of the new millennium, H.G. must navigate a world of cell phones, the internet, and identity theft and find his wayward wife . . . before the Ripper slays her. With the panache, excitement, and thrills that made Time After Time so popular, Karl Alexander has penned another winning tale of Wells: author, inventor, and unlikely hero.
Reviews from Goodreads.com