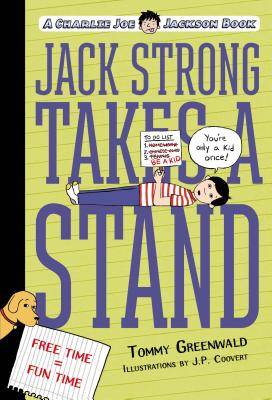 Jack Strong just wants to be a kid.

Jack's parents have overscheduled his week with every extracurricular activity under the sun: tennis, baseball, cello, karate, and Chinese language lessons -- all on top of regular homework. His parents want him to be "well-rounded" and prepared for those crucial college applications. Jack's not even in high school yet! Fed up, Jack stages a sit-in on his couch, refusing to get up until his parents let him quit some of his extracurriculars. But as Jack's protest gains momentum, it becomes clear that this sit-in may be getting a bit out of hand.

From the author of the popular Charlie Joe Jackson series comes a hilarious story of one overscheduled student who takes a stand ... by sitting down.
Reviews from Goodreads.com