Jack on the Box — Patricia Wynn 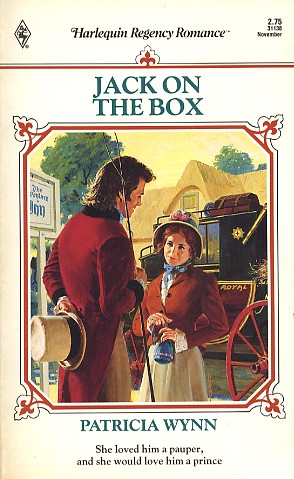 She loved him a pauper, and she would love him a prince

SHE knew he was no ordinary servant of the road

Fleeing from an unwanted visitor, The Honourable Cecily Wolverton was forced to travel by Royal Mail Coach to her grandfather's estate. The driver, Jack Henley, was a pleasant companion. Had she not known better, she would have taken him for a gentleman.

Much to her surprise, one month later, Mr. Henley was brought to the estate with a broken leg. Though he tried valiantly to stay in his place, Cecily had many reasons to suspect that he was not at all what he seemed.

Nevertheless, Cecily was glad of his equanimitable company, especially when her villainous cousin arrived on a bogus errand of mercy. She had come to depend on her mysterious guest, but dared not examine the reason why too closely.
Reviews from Goodreads.com