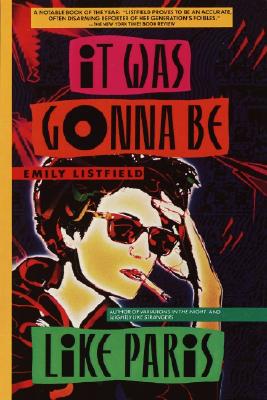 Share:
New York's East Village: a vibrant, decadent scene of young artists who emulate bohemian Paris of the 1920s. In this landscape populated by aspiring rock stars, addicts, Hell’s Angels and misfits, eccentric spontaneity is a way of life. This is where Sara, a struggling painter, works, lives and loves. She hasn’t made it yet, but she’s confident that her talent will carry her through. Sometimes. Sometimes she thinks she’s only fooling herself.

Her ally is sardonic, witty Carrie, whose look is part Vogue model, part bag lady. Her undoing may be Brett, an irresistibly charming, fitfully romantic “trouble boy.” A musician, he is by turns boyishly playful, surly, impetuous and thoroughly unreliable. Sara finds her love for him as addictive as the habit into which he slips more irrevocably every day. But release from her obsession is as elusive as art itself.

Emily Listfield, author of Variations in the Night and Slightly Like Strangers, was born and raised in New York City. Her short fiction has appeared in 20 Under 30, Bomb and the East Village Eye. She also writes book reviews for The New York Times.