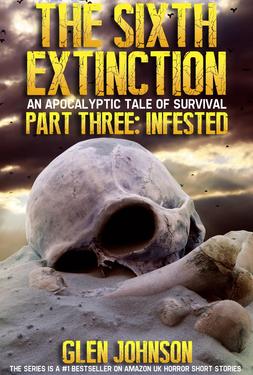 Infested is Part 3 in The Sixth Extinction Series.

The Sixth Extinction Series follows a collection of people from all walks of life, as they struggle to survive through the eradication of the human race.

A pandemic has swept the globe, decimating humanity, affecting all who breathe in its deadly spores. There are four stages to the virus. The third stage, where the host human becomes a frenzied, animalistic eating machine, is sweeping the country.

Doctor Melanie Lazaro is trapped along with the five soldiers left alive from the squad of twenty – and one of them is unconscious. The truck they tried to escape in crashed, dumping those on the roof into a pond. Their efforts to defend themselves seem futile as hundreds of creatures bear down upon their location. They need a miracle in order to survive.

Noah left Red, along with Betty and Lennie, in a house while he went looking for help. He finds where the gunfire is originating from, and strips off his clothes to blend in with the horde of charging, naked creatures, to try to reach the army. However, does his plan backfire, when he comes under the sights of a female soldier? In all the chaos around her, can Echo differentiate one naked body from all the others?

Red, Betty, and Lennie are barricaded in a house that comes under attack. Red rigs an explosion in the kitchen, which destroys the back wall, enabling them to escape into an old people’s housing complex. While searching for somewhere safe to wait for Noah’s return, Red stumbles upon two bloated poppers who sense her presence and explode. Betty finds Red’s body among the blood and destruction.

The creatures, whose actions were thought to be erratic, seemed to be pulled together as if a hive mind is in control, as the mass of naked bodies’ surge across the moorland heading towards a specific destination.

However, there is hope. A plan has been in operation since the deadly disease started. It would seem the spore pandemic has been expected and prepared for by the government for over a hundred years, ever since the first pod was discovered in 1898.
Reviews from Goodreads.com