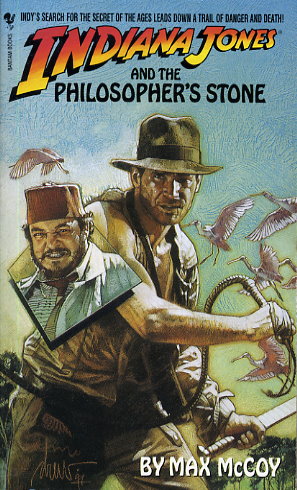 BLOOD FROM A STONE

For centuries the lust for wealth and immortality has driven men mad. Now Indiana Jones is called to London to recover an ancient alchemist's manuscript rumored to contain the formula both for turning lead into gold and granting its owner eternal life. Certain that a missing British alchemist and an insane Renaissance scholar are involved in the theft, Indy -- along with the alchemist's beautiful sister -- travels to Rome, and straight into the hands of Mussolini's fascists.

The mad scholar Sarducci has stolen the Voynich Manuscript, all right. But that's only half the story. The manuscript is really a map, leading into the desert and the most ancient and magnificent crypt in the world, where Indiana Jones will either witness an astounding miracle of alchemy -- or become the tomb's next inhabitant.
Reviews from Goodreads.com