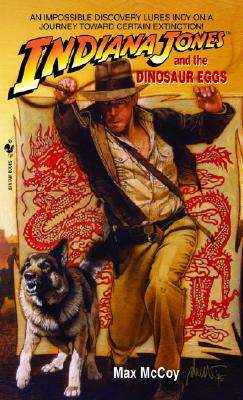 Fresh from a ride on a Nazi submarine, Indiana Jones is persuaded by a beautiful missionary to search for her missing father in Mongolia. Professor Angus Starbuck has discovered a dinosaur bone in the Gobi Desert. But unlike other such discoveries, this bone isn’t ancient! As Indy crosses from China through a treacherous mountain pass into Outer Mongolia, he runs afoul of the region’s fiercest warlords. Meanwhile, the world’s last innocent people, dwelling in a Stone Age paradise, are poised on the brink of destruction. Suddenly Indiana Jones is dueling wild dogs and bloodthirsty killers in a desperate effort to save the most historic discovery of the twentieth century: the last living triceratops!
Reviews from Goodreads.com