Indiana Jones and the Army of the Dead — Steve Perry 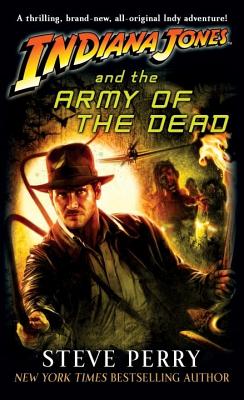 There's no rest for the weary treasure hunter, but that's how Indiana Jones likes it. Fresh from spying for the Allies in the thick of World War II Germany, the globe-trotting archaeologist doesn't need much persuading to join his cohort "Mac" McHale in searching for one of the most coveted of artifacts: the fabled black pearl known as the Heart of Darkness. But the partners in adventure are not alone on their foray into the mysterious jungles of Haiti. German and Japanese agents are in hot pursuit, determined to possess the ebony artifact -- and its secrets -- for their own sinister purposes. And shadowing them all is an infamous voodoo priest, with powers of both diabolical science and black magic at his command.

On a treacherous odyssey across the Island of the Dead, where the legend of the zombi looms large, spiders, snakes, and booby traps will prove the least of Indy's challenges. And capturing the prize will be child's play compared to confronting an enemy unlike any other, whose numbers are legion and nearly impossible to kill -- because they're already dead. . . .
Reviews from Goodreads.com