In the Heart of Darkness — Eric Flint; David Drake 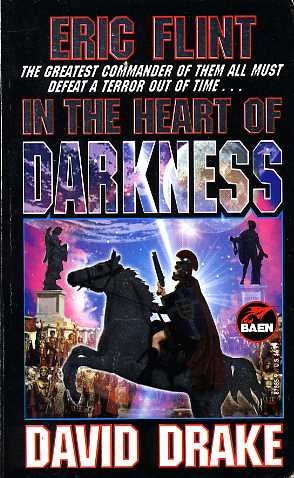 Share:
HUMAN EVIL DIRECTED BY AN INTELLIGENCE FROM BEYOND TIME

The Malwa Empire, using gunpowder weapons and ruthless terror, has conquered 6th century India and is forging the subcontinent's vast population into an invincible weapon of tyranny. The supermind that commands the Malwa intends first to rule the world and then to set its inexorable stamp over all eternity. No action is too bestial for the supermind to order, nor for its Malwa lackeys to execute.

Belisarius, the finest general of his or any age, must save the world if he can. Guided by visions from a future that may never be, he and a band of comrades penetrate the Malwa heartland, seeking the core of the enemy's power. Against them are numbers, savagery, and an icy, inhuman intelligence that is without weakness or mercy.

In Constantinople, those who would oppose evil face not only Malwa assassins and home-grown traitors but also the suspicions of the emperor himself: Justinian the Great, whose brilliant, febrile mind sees a threat from any competence and a plot in any counsel. If the truth comes out, the only question is whether Malwa daggers or Justinian's executioners will get to the patriots first.

As Belisarius fights his way across the chaos of northern India, Constantinople explodes in a tumult that could destroy the city, the empire, and all hope for mankind. Courage and cunning must face overwhelming evil

But when Belisarius leads the forces of good, only a fool would side with evil!